A Time to Reflect after 10 Years of the Kusambira Centre (Mwaya Community Library)
Friday, 27 November 2015

“A library opening in a rural part of Malawi would surely have a RIPPLE effect!”

My name is Donncha O Donnchadha and I volunteered at Mwaya between July 2005 and June 2006 and was appointed Project Manager for the setting up of the Library there. The idea of having a library at Mwaya was born and three young women did great work in gathering the monies needed for the project through a number of fundraising activities. It all began when Georgina Newman, Christina Weimann and Leila Nutie from England travelled to Malawi and spent three weeks working on the start of the project.

Before we began, I went in search of a number of other people connected with libraries. I needed to get a sense of what their ideas and thoughts were about our project. The people I spoke to were the District Librarian for Nkhata Bay, Mr Joseph Nduna. Then I went on to speak with the Librarian of the University of Mzuzu, Dr Joseph Utah. Both said our job would be a long and arduous task, given the fact that there was no culture of reading books in Malawi. They gave good advice about how we could proceed.

On the 25th November 2005 the Mwaya Community library was opened. The library has a sign above the door that reads “The Kusambira Centre”. The Librarian, Mr Longwe, and myself, thought that this would be a more inclusive title and more welcoming for our users. The word Kusambira translates to learning, which encapsulates the whole meaning of the project. 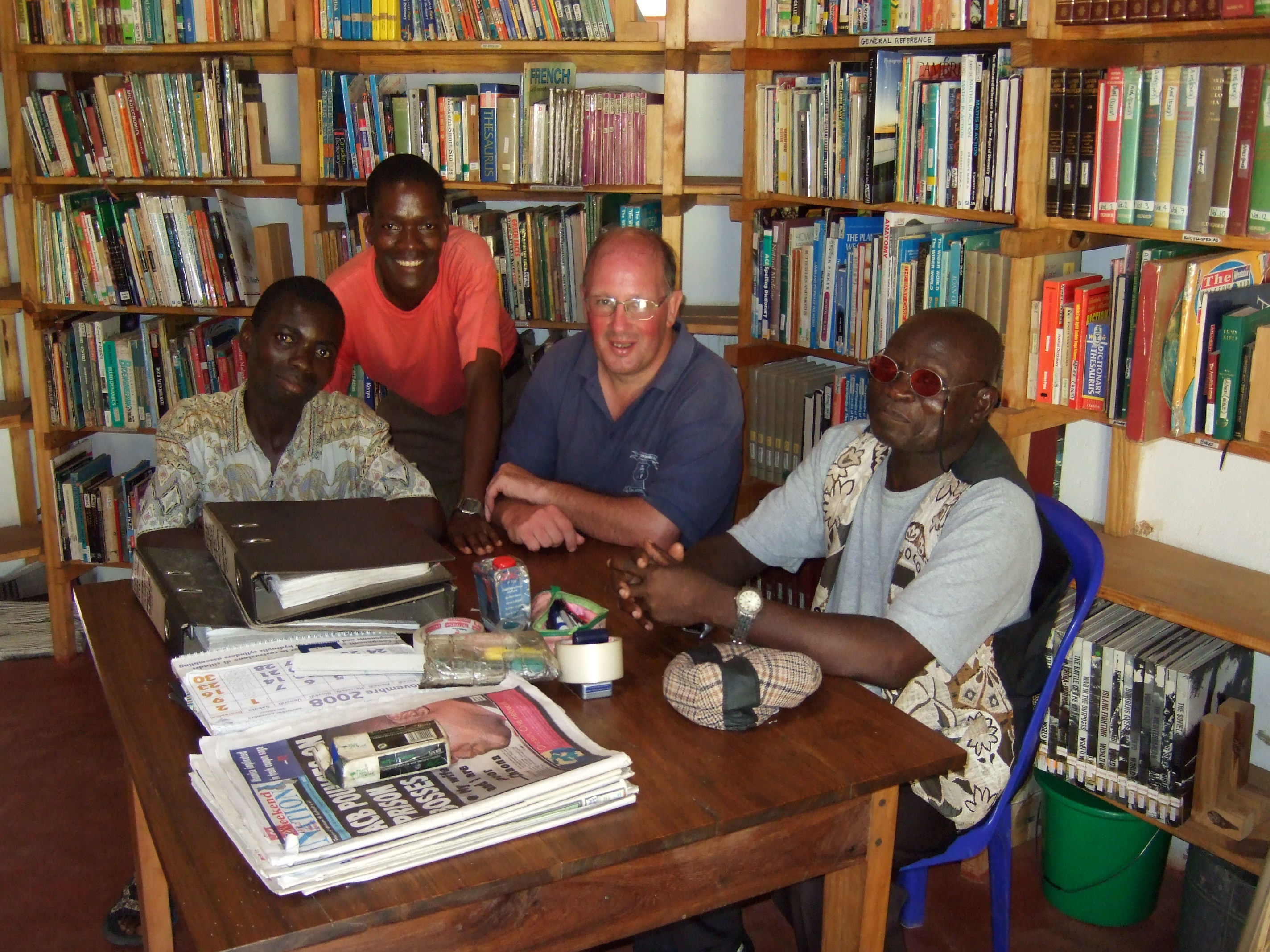 For the first 3 months after opening, users could only read books in the library. This was to enable them to become familiar with using this new facility. Then from March 2006 people began to borrow books from the library. It was surprising for me to see borrowers arriving after two weeks to return their books. Many of these people would have walked at least a few kilometres to and from the library. They may have got up earlier on these days, so they could afford the time to walk. I was impressed with the commitment that the people had to reading and learning, and clearly the library had met an important need for the local population.

At the start we liaised with the school so that every class would have an outdoor reading class at least once a week. We were fortunate to have enough volunteers to assist in this part of the project. Classes would be in the form of peer teaching. The boys and girls who were proficient would assist those who would struggle. The role of the volunteer was purely to monitor and assist if needed, but their efforts helped many others to enjoy the full potential of the library.

Since then I am happy to say many other classes involving adults or children are taking place. At present there is an Adult Literacy Class run for the ladies who register for it.

There are a number of people who supported me, the library staff and RIPPLE Africa at the start and as the project went on to greater heights. The main person I would like to thank is my fellow worker Mr Longwe. Since we sat and plotted the rules and regulations ten years ago, he has been at the coalface. It is testament to his principles and work ethic that the library is so successful.

Mr Timothy Chirwa, the Headmaster at Mwaya, knew from day one that this library would be a big plus for the community, and has supported it all the way. The late Mr Aleke Banda MP, who was our local MP, visited a number of times and gave us great encouragement. He realised how beneficial the library would be to his community.

Mrs Gaulphine Nyrienda and her staff at Maneno Bookshop in Lilongwe and Mzuzu helped in every way they could to make this project a success.

Since the library was built in 2005, there have been a number of additions. I visited again in 2007 and completed the task of installing the shelving for the books. At that time we stocked approximately 4,000 books and a number of journals. Since then there has been more shelving erected inside to cater for further expansion of the stock.

There is now a covered reading area to the side of the library which enables the readers to read, both in the rainy season and when it is too warm. Also the library now has the daily newspaper delivered. New books are bought on an ongoing basis. All of this work continues to make this facility ever more relevant to the community. 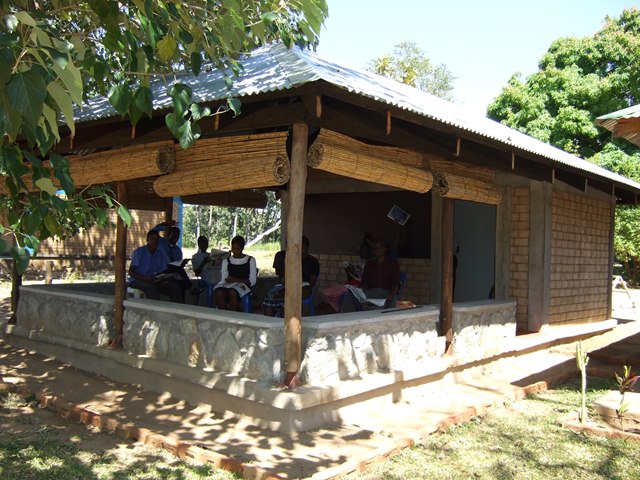 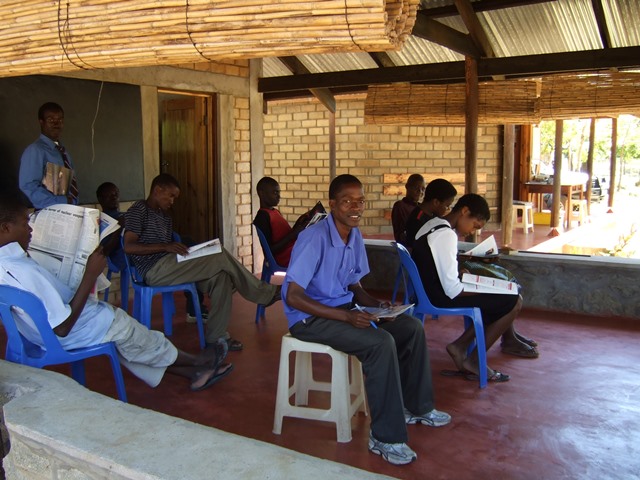 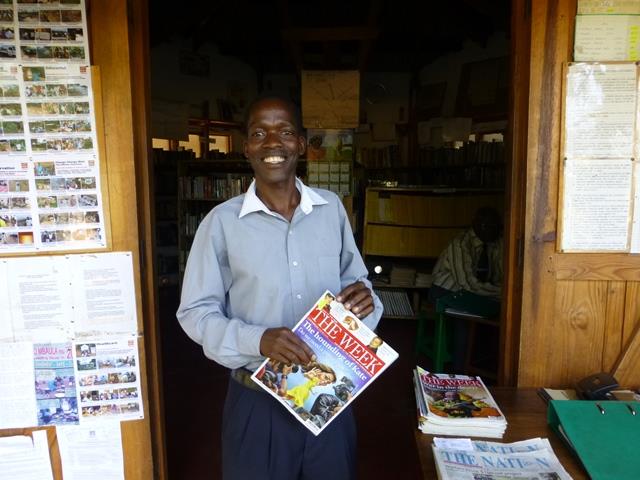 The opening of a library in an area like Mwaya is a tremendous achievement. On reflection I always knew that it would take a generation for it to take an effect, and this is what I see happening.

The library is instilling a new way of learning. The possibility for a better education leads to a new way of living, because I believe literacy breeds hope and illiteracy breeds apathy. The people at Mwaya and the surrounding areas are lucky to have had the volunteers, their families and friends, as well as the donors of RIPPLE Africa. These are the people who have supported this library and made it possible.

I have returned to Mwaya a number of times since 2005 and really feel humbled by the whole volunteering experience. The community has always been very gracious for what has been done for them. This extends not only to the library but also to the good effect RIPPLE Africa has on the community in other ways, especially in the areas of environment and education.

On the occasion of the 10th Anniversary of the library I will donate 3 books to the library. The books I have chosen will hopefully inspire our many readers. They are –

I Am Malala: The Girl Who Stood Up for Education and Was Shot by the Taliban by Christina Lamb and Malala Yousafzai

The Boy Who Harnessed the Wind: Creating Currents of Electricity and Hope by Bryan Mealer and William Kamkwamba

Unbowed: My Autobiography by Wangari Maathai

I look forward to seeing the Kusambira Centre going from strength to strength for many years to come.

“The knowledge in the library is free and all they need is their own container”.

Should you wish to make a donation to support the purchase of books, please visit our donation page.